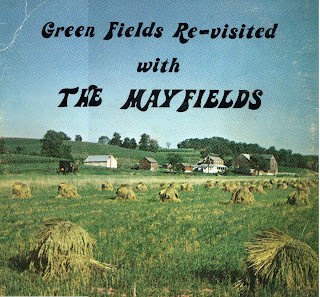 The Mayfields are a singing, picking family from Greenville, in Southern Illinois. Their repertoire of hundreds of songs and tunes, includes 400-year old ballads, early country music, mid-forties swing, works of contemporary composers and "brand, spankin' new ones" they've written. It all began when a seven-year-old Lyle was given a $.25 harmonica by his music loving mother. From there he progressed to the guitar, mandolin, banjo and practically all the country string instruments. In 1950, Doris Mindrup becam Mrs. Mayfield, promptly started learning the guitar and singing with Lyle on a local radio show. Next came son David who debuted on the folks' program at age 34 months. After David, daughter Lynda sang part time with the act. Now the third spot is amply filled by younger son, Layne, who can tickle the strings of almost as many instruments as Dad. (They own in excess of 100.) Many of their instruments are handmade in Lyle's workshop. Some are, as Lyle puts it, "the only ones like 'em in captivity." We think you'll like the songs on this album by The Mayfields. Incidentally, they wrote eleven of the thirteen included here.
Posted by Ryan Smith at 9:15 PM